Studio Trigger, to me, is the darling (pun not intended) of the Anime industry. It didn’t start that way, mind you. The hype and praise surrounding it was merely built on the staff list and the ridiculous expectations of fans who were bound to be disappointed when Kill la Kill wasn’t perfection. Factor in several other duds like Ninja Slayer or the second Little Witch OVA and it starts feeling like Trigger was all talk.

Thankfully, with shows like Kiznaiver or Space Patrol Luluco, Trigger is starting to really earn the hype it garnered at the beginning. It is a studio overflowing with creativity, exploring new avenues and other genres with every project, even if they don’t always have a ton of money. Perhaps to rectify that specific issue, Trigger has partnered with A-1 Pictures to produce Darling in the Franxx, a brand new mech anime from the director of The Idolm@ster, Atsushi Nishigori.

It’s always hard for me to accurately determine what shows are being “talked about” this early into a season, but I can assure you that Darling in the Franxx is going to be talked about. However, that discussion will likely how the show wasn’t quite what many were expecting. What we were expecting was a futuristic character drama with a large cast of diverse characters, an interesting world and some cool action supervised by Hiroyuki Imaishi and accompanied by a soundtrack that sounds eerily similar to the works of Hiroyuki Sawano.

Granted, the first episode was in line with those expectations. The show takes place in a distant future in which humanity lives in mobile city fortresses called Plantations. In this dystopic future, children are raised to become pilots for the FRANXX, mecha designed to combat monsters called Klaxosaurs. The cast of characters are mostly teens who have been raised for this purpose. They are called “parasites” and are given code numbers rather than names.

The exact nature of this society is what I’m interested in seeing develop over this series. Since the main cast has been isolated all their lives in “The Birdcage”, a facility to raise pilots, we as the audience know about as much about how normal people live in this world as they do. What glimpses of the adults we do get looks bizarre and downright occultic in how they indoctrinate these kids into their role as pilots. More frightening is the prospect of failing in that role, the subject of the protagonist’s conflict.

A common thread through this episode is the idea of a flightless bird, illustrated in the first episode’s opening scene by the Jian, a mythical one winged bird that requires a partner to fly. Code 016, or Hiro, is unable to pilot a FRANXX properly due to his inability to sync up with his partner. He fears he has become useless to anyone, until he encounters by far the best character, 002, or Zero Two.

[According to the synopsis for this show, Hiro used to be called a prodigy, but that element of his backstory has not been addressed yet. All we are shown so far in the series is him not able to sync with anyone]

Zero Two is a half human, half Klaxosaur pilot who has earned the title “Partner Killer,” as her male partners tend to pass out and even get killed after riding with her too much. She meets Hiro under rather adorable circumstances and they hit it off rather well. Her otherworldly appearance and behavior give her an alien feel, but I find her so charming because there is a genuine sincerity when she talks to Hiro, perhaps the only character who doesn’t fear her for being different. Their relationship is by far the dynamic I’m looking forward to seeing develop the most. 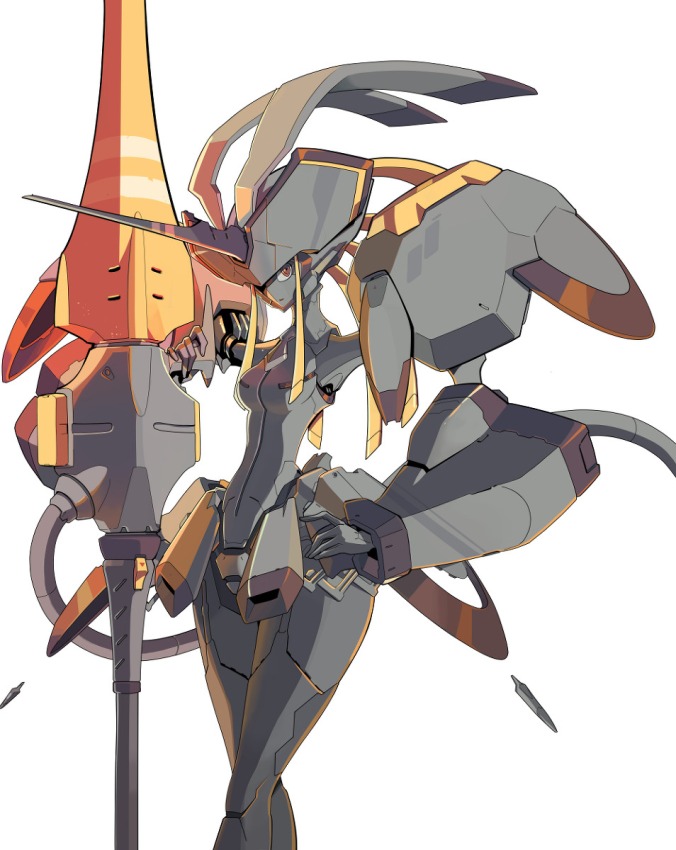 Rounding out the first episode is an explosive action scene with all the glitz, glamour and sparkle effects that I demand from a Trigger fight scene. A klaxosaur attacks the plantation and Hiro must pilot the FRANXX Strelizia with Zero Two to defeat. The fully transformed FRANXX look incredible and it is all thanks to mechanical designer Shigeto Koyama, who has worked on the likes of Star Driver, Gurren Lagann, Eureka Seven and just so many shows with a really cool mechanical design.

Anyone who follows this blog knows how important music is to me and I wasn’t kidding with my comparison to Hiroyuki Sawano earlier. The music of Darling is done by Asami Tachibana, who has worked with Sawano on the Owari no Seraph soundtrack, as well as done tracks for Haikyuu. The music during the first fight was the sort of epic and inspiring track that made shows like Gurren Lagann a joy to watch. Her music is a light blend of Sawano with Taku Iwasaki for good measure.

Episode two is when a whole other dimension of the show is revealed, to which I had mixed reactions. The episode gives some more time to get to know the supporting cast as well as how the FRANXX are operated. It is here where it becomes apparent that Darling in the Franxx has some very sexual themes throughout.

The male pilots are referred to as stamens, while the female pilots are pistils. If you haven’t picked up on VERY subtle allegory #1, this is an allegory for the reproductive system of flowers. That alone would be fine, but the scene below illustrates what some may find a bit too much.

The positioning, the way the steering mechanisms are attached to the girls’ hips and even the dialogue all suggest an allegory for sex. The dialog between the characters is laden with innuendos that made me question whether or not I was supposed to that the show seriously. I was beginning to worry this show wasn’t anything at all what I was expecting. So, is the sexualization too much?Furthermore, does it have any meaning?

This is Trigger after all. They made Kill la Kill, a show with tons of sexual themes and upon analysis, that show has some pretty deep messages about duality and balance. But that show managed to make something as ridiculous as it’s lewd fanservice work because the show’s ridiculous nature was a part of its identity from the beginning and a huge part of its message. Darling in the Franxx is a show that seemed to take itself pretty seriously in episode one and continues to play all this off with a (mostly) straight face.

So what does it mean? It is a bit too early to tell, honestly. There are a lot of factors to look at and many ways that the themes can be interpreted, but it all depends on where the show goes from here. I have seen some speculate that while the other characters adhere to a power dynamic that puts male pilots in control of female pilots, Zero Two and Hiro’s connection may be more nuanced, putting both pilots on equal ground and possibly abandoning (or at least transcending) the visual dynamic presented.

Zero Two is much more sexually independent and capable of piloting a FRANXX solo. Her principles are different than that of the other girls in the show, who as we have stated have been indoctrinated with certain principles about “equality”. I would not be surprised if Hiro and Zero Two’s connection was the strongest, perhaps inspiring a change in the sexual dynamic of the other characters.

In the end, it is simply too soon to say what these themes are trying to say yet. When Hiro and Zero Two finally pilot together, I’m sure we will get a better idea of how all of this fits into play and whether or not the sexualization serves a greater purpose. Until then, I can’t say, everyone will like this element of the show. It may even be a deal breaker.

If there are any significant benefits to this sexualization that are nonthematic, it would have to be the development of character relationships. Having characters paired off in this way practically creates the ships for the viewers. Because the characters are connected through such an awkward, bizarre and yet admittedly intimate connection, it makes all the more sense for them to be concerned when the other is hurt and makes the dramatic stakes all the higher when their connection is weakened through a conflict between them.

Finally, let’s talk a bit more about the visual elements of Darling. The character designs are done by none other than Masayoshi Tanaka of Your Name and Anohana acclaim. His character designs have this soft roundness to them that is always appealing to the eye and Trigger’s animation does a great job bringing his designs to life like never before. The art of Darling has got nothing on Kiznaiver, but the style shines more for its vibrant colors and the sleek designs of its characters more than the impressive look of the environments.

I intend to watch Darling in the Franxx if only to see just how far Trigger is willing to go to make me fall in love with a show where characters pilot mechs using steering mechanisms attached to a woman’s ass… And I suppose a little bit of everything else. Look forward to a review of this one when it is completed in the spring.

DARLING in the FRANXX is available for legal streaming on Crunchyroll

Have you watched DARLING in the FRANXX? Leave a comment below telling me what you think and tell me what other shows airing this season you are interested in. Thanks for reading and as always, see you next time!

2 thoughts on “First Impressions of DARLING in the FRANXX”