As I said in my review of season one, it isn’t often that Anime fans are blessed with a period piece drama aimed at a mature audience. To be honest, given how typically shows like this don’t get a lot of attention, I’m amazed we got a sequel. Now that I’ve found a peaceful Monday morning to finish the series- exactly the type of peaceful scene I think the creators intended this show to be viewed in- I can’t resist talking about this series.

Much like the first season, It feels a bit difficult reviewing this series because it is so much quieter and more reserved than most other shows I watch- even shows that are also dramas. It is a melancholic jaunt through the lives of artists, performers, mothers, fathers, saints, sinners and the children who carry on the legacies of their families. It is one of the most unique Anime I have seen in years and I can tell you right now, it is one that everyone should check out.

Season 2, subtitled “Descending Stories”, is appropriately a tale of generations, even more than the first. Whereas the first season was about Yakumo’s life story, the second season is focused squarely on the present, finally giving focus to Yotaro and Konatsu, who were absent for most of the first season. This doesn’t mean that the show abandons Yakumo, far from it. In fact, Yakumo proves to be the best character in this series.

Yakumo is still haunted by what happened the night of the “shinju” or double suicide hinted in the title, and his failure to fulfill the promise to Sukeroku has him pondering his own age and the end of rakugo. It is this inner turmoil that brings out the best in his voice actor, Akira Ishida. A performance that shows us the age of that character. His journey is made even more emotional by the supporting cast, which has almost the exact opposite philosophy.

This younger generation, inspired by the work of their predecessors, pushing onward to expand the art form while the very man who inspired them is trying to burn it all down with him. Tradition is a big part of season two’s story, but it also explains how traditions change as they are passed down.

From Yotaro finding a new voice with which to perform rakugo to Konatsu trying to become a performer despite being a woman to newcomer Eisuke Higuchi, who befriends the cast and strives to write new rakugo stories, everyone is keeping the core values of rakugo the same while changing it to fit the times.

Initially, I was disappointed that the final episode of season one didn’t simply go back to Yakumo telling his story to Yotaro and Konatsu and instead skipped to Yotaro becoming a shin’uchi a whole ten years later! However, it stands to reason that Yotaro works better in a supporting role, especially to inspire Yakumo not to give up on rakugo. That and he has plenty on his plate otherwise.

Between helping Konatsu raise her son Shinnosuke (who is criminally adorable) and controversy surrounding his past life of crime, Yotaro has plenty more on his plate this time around. A pleasant change, as the show wastes no time reminding me why he was so entertaining in the very first episode of season one.

It also bears mentioning that the first episode, rather thoughtfully has Yotaro breaking the fourth wall by recapping some of the key events of season one some may have forgotten and reminded us why he is so adorable. All of this- of course- presented as a rakugo story in the first few minutes of season two’s premiere.

His sheer enthusiasm mirrors that of Sukeroku, but as he finds his voice for rakugo through season two, he forms a style and persona that rival both Yakumo and Sukeroku. It is invigorating to behold. 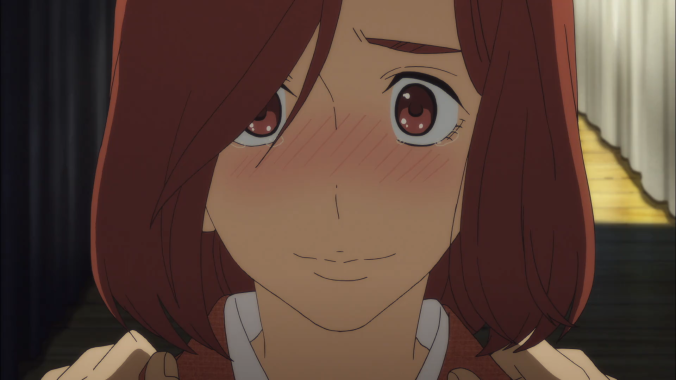 Konatsu is even better, continuing to prove herself as the fiery pistol who’s passion for rakugo grabbed me from the get go. Her relationship with Yakumo is a complicated one and considering she believes him to be responsible for her parent’s deaths, her character arc was a never ending source of intrigue, leading to the single most shocking twist of the series.

Rakugo’s narrative flows very well between each episode with a pace that keeps you invested. The twists in season two re shape the way you think about the characters and their motivations with writing that both compliments the silliness and childlike attitudes of Yotaro while approaching relationships between him and Konatsu or Konatsu and Yakumo with a sense of believability. Even at its most fanciful, it is still a very smart story and one that is brought to life very well thanks to the visual direction.

The animators at Studio Deen continue to impress with a focus on facial expressions and lively character designs to compensate for any restrictions in the budget. This comes across most importantly during the rakugo performances which are just as fun here as in the first season. Even hearing one story multiple times is still meaningful depending on how a character has mastered it. I would compare it to how the dances in Yuri on Ice changed each time based on how the characters improved or their mental state at the time.

I never really gave much praise to the music in my review of season one and that cannot be forgiven, as Kana Shibue’s soundtrack is superb. It’s astounding that this is her foray into Anime soundtracks. I sincerely hope she gets more work in the future because the music completely transports you into the era. Give the ending theme a listen below, it is truly a delight.

The second season of Showa Genroku Rakugo Shinju is a tale about passing down what matters and how even the traditions we fight to keep alive will change in order to survive. More importantly, though, it is about art and family and how they aren’t too different. A melancholic delight with one goal, just as simple as the aim of rakugo: to entertain.