At the risk of understating this film’s message, showbusiness sucks. Satoshi Kon’s 1998 thriller by Studio Madhouse, Perfect Blue, was a must-see for me during its re-release in theaters last month. I had always heard about the film and seen glimpses of its iconic moments, but without the full picture, I was still in for a lot of surprises.

Kon’s films have stretched close to the same critical acclaim here in the west from adults as Miyazaki and Ghibli have achieved with… well, everyone. The late and great creator’s films have also inspired many auteurs to take inspiration. Such as the late Mamoru Oshii’s Ghost in the Shell inspired the Matrix, Perfect Blue inspired Darren Aronofsky’s Black Swan from 2010. So it is especially criminal that I had not previously seen any film by the late Mr. Kon before this one. And this was quite the start.

There is a sense of unease that permeates all of Perfect Blue‘s commentary on identity and pop culture. It’s especially sobering considering the culture of the anime fandom and the parallels seen therein. The film opens with the protagonist, Mima Kirigoe, performing on a stage as part of her idol group “CHAM!” to an audience of silent otaku with cameras.

A group of hecklers begins to disrupt the show, throwing things at Mima on stage, as she dodges adeptly, unphased. This, a frightening sign of the attention she has gotten used to, is only the beginning, as fighting breaks out between hecklers and loyal fans. Our lead, whose plea to end the fight in the audience is akin to an idyllic princess, no better a tool to quell a group of otaku.

And it works, at least to those who give a shit. For the hecklers, maybe they just got bored, or maybe they picked up on something everyone else did not. Everything is just… off. And that is often what it felt like in this film. This commentary on fandom is set in the midst of the internet age granting this movie a certain relevancy.

Mima is an idol who at the beginning of the film announces her departure from the idol group that made her popular and her intentions to become an actress. However, her past won’t seem to let go, as she discovers a website that knows a frightening amount about her, leading her to believe she is being stalked. This fear is confirmed by the stalkers correspondence with Mima and a string of frightening implications, followed later still by even worse events.

Despite the initial humor of watching a film in which the main character knows nothing about how the internet works, the story still feels relevant today. Because by and large, the methods of which the internet can be abused like this still exist. It’s like watching Mima open a door to a new world of dangers that the audience watching today have grown accustomed to.

Mamoru Uchida, Mima’s most obsessed fan, appears throughout the film and symbolizes the most obsessive parts of fandom. That dedication and feeling of entitlement when the person at the center of their obsession does something they do not like. He doesn’t fall in love with Mima, but the idea of Mima. It’s a character, a fake, yet Mamoru sees Mima’s career change as a betrayal because it goes against that idea. Mima is a victim of a then-new platform for such obsession to fester into something more dangerous. 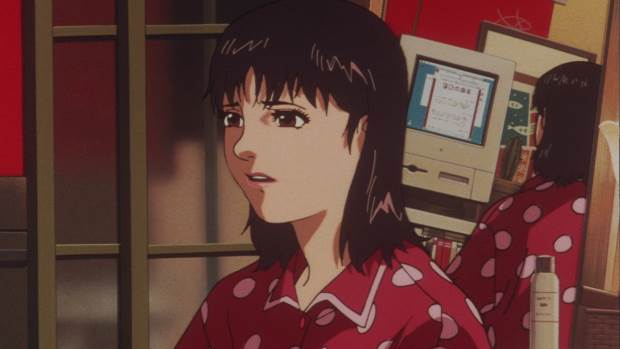 Not only does Mima deal with her past coming back to haunt her as if she owes the world anything, but she also struggles with becoming a serious actress. She worries herself sick over remembering the few speaking lines she has and her two managers fight over what is the best course of action for her career. Mima makes “choices” but has no one who she feels she can share her insecurities. She doesn’t really want to do what she does, but what else can she do to achieve her dreams?

By the halfway point, Perfect Blue turns into a mind game, wherein violent crimes are being enacted upon those close to Mima. And this begs the question: Is it the stalker responsible for these killings? Or is Mima actually losing her mind?

This movie revels in misdirection and the entire time I was watching, I was never able to confidently guess how it would all end, because of that. This is a psychological horror and a breathtaking one at that. It is a film about fame gained but innocence lost. Throughout the one hour, twenty-minute run, Perfect Blue poses questions and after the answers are given at the end, lets the frightening implications set in.

For as engrossing as the narrative is, the technical elements are a mixed bag. For a film by Madhouse, I think I may have been a bit disappointed by the artwork on display. The animation is great when it matters the most, but the background art and character designs are nothing quite as breathtaking as Ghost in the Shell’s from three years prior.

The movie’s sound design was far more gratifying, and for me, compensated for visual qualms. Without any particularly memorable tracks, the sound was incredibly immersive. Be it a slow orchestral build or a bombardment of noise, the tension was always just right and my heart was always beating harder after each twist.

For many, Perfect Blue has been and will be remembered for its unrelenting psychological dissection of the leading lady. For me, I will constantly think back to this film’s portrayal of fandom and what it says about how people become obsessed with ideas so religiously as to become violent. Most of all, how that same violence tends to dismiss those as the center of that creative work.

I love when I sit down to write a review and I finish appreciating the film even more. These reviews can be a pretty therapeutic exercise when I’m not worrying about deadlines. Let me know in the comments below what you think of Satoshi Kon’s works and what other films/shows I should watch to scratch that psychological drama itch.

Down the pipeline, I have a bunch of new ideas for things to write that I’m really excited to share with everyone. However, the first post that I’m prioritizing is a big post talking about Crunchyroll. Some people love it, some people hate it, and I wanna talk about why. I hope you will all stay tuned for more.

Thanks for reading and as always, see you next time!