[Update (May 13th, 2017): The official Under the Dog website is working again and the creators have posted the “final update” on the Under the Dog project. The blog post can be found here.]

In early 2016 I got really excited about a Kickstarter project that I had already known about for a while but never quite grasped the importance of. Under the Dog is an Anime project that was a Kickstarter success back in 2014, only to be on hiatus until the OVA was finally released on August 1st, 2016. It promised to be a gritty science fiction epic inspired by Akira and Ghost in the Shell. It was a project helmed by industry veterans but now… nothing. More than half a year after the release of the OVA and nothing. So what happened? How did a project with such promise fall so far into the depths of obscurity?

Back in 1995, Jiro Ishii wrote a 26-episode Anime about individuals with superpowers forced to kill others like them. If they fail their missions, run away, or simply die, their families will be killed. A very cool premise, if a bit perplexing. The script was basically dormant for years until a team of creators came together with the intent of bringing the story to life.

You can still see the original production team on the Kickstarter page and the players are certainly impressive. First off, it was directed by Masahiro Ando.

You may recognize his name from my post about Studio Bones. He was a key animator on Neon Genesis Evangelion, Ghost in the Shell, and the Animation director for the Cowboy Bebop movie. he has also directed Sword of the Stranger and Canaan to name a few. Canaan was actually based on a novel by Jiro Ishii, so the two had already worked together before.

Yusuke Kozaki was brought on to do character and mechanical design and god bless this man. Not only was he the character designer for No More Heroes and Fire Emblem Awakening, but his concept art, weapon designs and other mechanical designs were absolutely phenomenal. Just look at this shit… 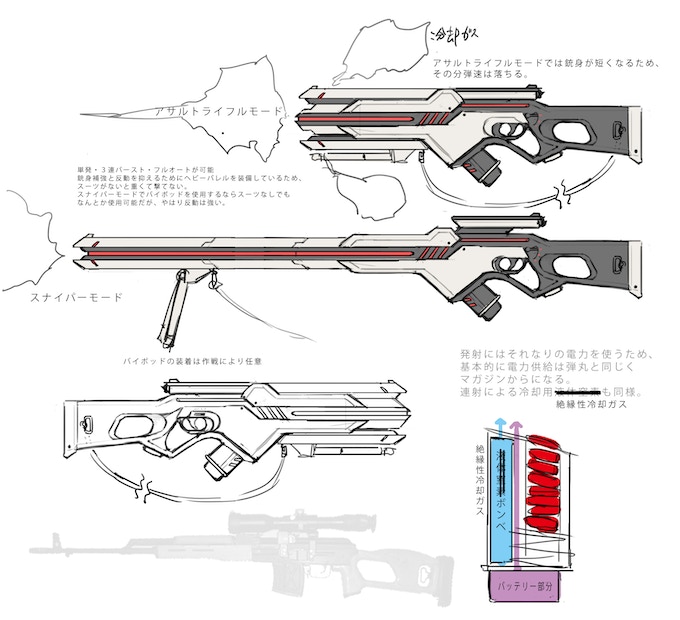 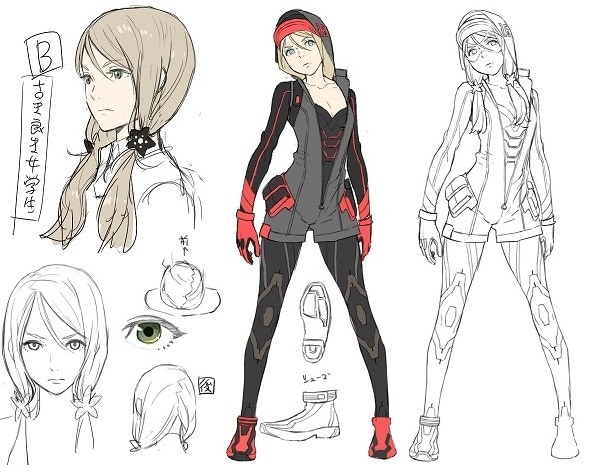 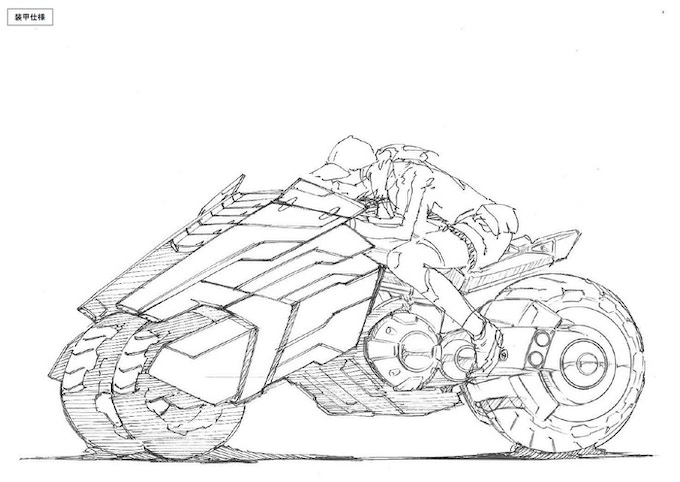 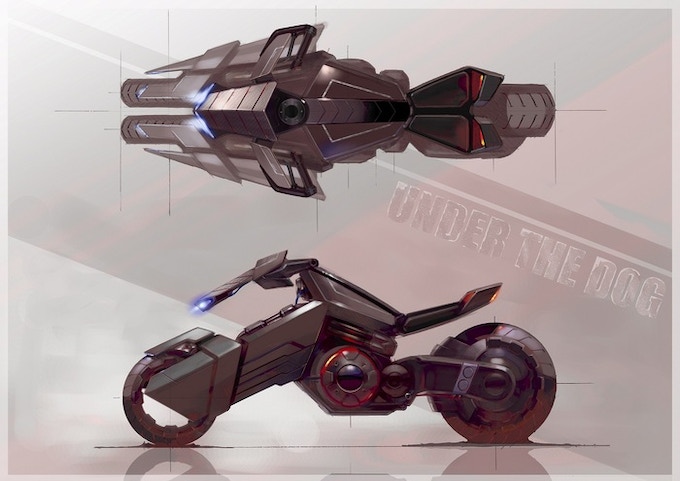 (Words cannot describe how sad it is looking at this amazing art, knowing how this story ends)

Hiroaki Yura was the original producer of the series and the founder of Creative Intelligence Arts. His resume is pretty solid, having worked on The Disappearance of Haruhi Suzumiya and Steins; Gate. However, his involvement in the project would be short lived.

And of course, Jiro Ishii, who wrote the original story as well as several video games in the Dragon Quest and Professor Layton games, among other things.

To top it all off, we were greeted to a two and a half minute trailer filled to the brim with gunfights, chases, and hot blonde women kicking 31 flavors of ass.

So everything was looking promising… and then at the beginning of 2015, there were complications.

A Change in Production

So the project successfully raised $878,028, a whole $298,028 over the $580,000 goal. But after this huge success, creative differences led to disagreements between Creative Intelligence Arts, Hiroaki Yura’s production company, and Kinema Citrus, the animation studio. This resulted in Yura leaving the project and Kinema Citrus taking primary control of the creative direction of the series. Additionally, there were two new producers, Koji Morimoto and Yoshiro Kataoka. Plus, new writers, Yukinori Kitajima and Keigo Koyanagi, and a new animation director Masahiro Sato.

At first glance, the change in staff so close to the funding was already cause for concern but it depends on how you look at the production. Now, to the credit of Kinema Citrus, they consistently updated fans on the progress of the series, and that consistent updating happened almost immediately after the change in production staff. Morimoto actually helped assess the financial status of the project and realized that several of the backer rewards were more expensive to produce than expected. So in a way, the change may have been for the better in several respects, but we will come back to this later.

“Under the Dog Episode Has Been Released”

August 1st arrived and the OVA, titled “Episode 0” was about 30 minutes in length and was available for legal download to all backers. Thankfully, for the rest of us, the OVA released on Kissanime the same day. Now, the reception of Under the Dog has been mixed… I suppose. I only suppose because there was a criminal lack of anyone talking about it. Major YouTubers who promoted it weren’t even so much as acknowledging its existence. It feels like the hype for it died down enough over the previous year that no one paid too much mind to it. The few critical reviews you can find of Under the Dog have few positive things to say about it.

I’ll keep my critique of the episode itself to a minimum as I’d like to write a review for the episode, but here is a small synopsis. This 30-minute episode was all about a girl named Hana Togetsu being sent into a high school under the guise of a transfer student when in reality she is being sent in to retrieve another student, all the while NATO soldiers storm the school looking for a target of their own. Anthea, the blonde woman from previous trailers, doesn’t make her appearance until the end battle of the episode, seeing as how Hana’s arc as a character in this first episode is meant to work as a primer for the events of the series… whenever that happens.

So why the hate? Why did people end up not liking the OVA? First off, one needs to consider the promises that were made about this project. Under the Dog was funded through Kickstarter because the people who were creating it claimed that it would have been difficult for them to have the amount of creative control they wanted without the crowdsourcing. Additionally, the creators wanted to bring Under the Dog to international markets, whereas Anime production committees typically only look to the domestic market. When people funded Under the Dog, they were expecting something new that they hadn’t seen before and that was going to reinvigorate the anime industry.

YouTuber Digibro criticized the OVA saying that it betrayed the tone presented in the promotional material and that despite the creators stating that they couldn’t make the show they wanted to through conventional production methods, the final product felt like the exact type of show that would be aired nowadays. Additionally, the visuals look a lot different from the promotional material. Less dark and cyberpunk, and more milquetoast. These critiques are certainly valid and they pop up a lot in the few reviews I can find. However, I’d like to observe what has become of Under the Dog since the release of Episode 0 and why this project isn’t the drastic change the industry needed.

Where Do We Go Now?

Almost eight and a half months later, Under the Dog hasn’t given much insight into where the project is going after this. To make matters worse, at the time of this writing, May 10th, 2017, I cannot even so much as access the official website for Under the Dog. It seems like the link stopped working. The backer rewards, including the Blu-ray, art books, posters and other such goodies were finally delivered after many delays.

Funnily enough, they complained recently about people watching the OVA illegally. I guess they don’t understand how people tend to watch anime. Maybe I would have contributed money to the project if the PayPal page had images for each of the items before the store page closed for good, but I digress. Even though I liked the OVA and found its action and music enjoyable, I can’t help but wish for more every time I look back at the original trailers.

Did we need Under the Dog?

The creative team promoted Under the Dog as a pure sci-fi action show harkening back to Ghost in the Shell and Akira. I would still love to see them continue the series and release a series or a couple movies, but I simply think that Under the Dog was outdated before it even came out. I mean, Under the Dog was being hyped up when cynical anime fans were claiming anime needed a change. This is how the stupid term, “savior of anime” came to be attached to shows like Kill la Kill. The fun fact is that the anime industry is doing really well right now.

It seems like every year, anime is getting bigger and bigger in the US thanks to services like Crunchyroll and Funimation and a lot of really good shows coming out each season. Anime doesn’t need saving, it needs to keep getting better. Maybe this new market for Anime and the direction of the industry will allow Under the Dog to get made in its true form, without resorting to crowdsourcing, but only time will tell. Until then, Under the Dog will be remembered as a failure in Anime projects. But hey, at least we have some pretty cool art to remember it by.

Have you seen Under the Dog? What did you think of it? Did you ever even hear about it before reading this post? Leave a comment and tell me what you think about this ambitious project and as always, I’ll talk to you next time.

4 thoughts on “What the Hell Happened to Under the Dog?”