After finishing season one of Attack on Titan in January of 2014, I began my descent into the rabbit hole that is Japanese culture and animation. It’s been a long journey and now that I’m well into my fourth year of being an anime fan, Studio WIT just so happens to have released the long awaited sequel to Attack on Titan. It has been four long years though, in which my taste in anime have changed and while I still remember season one fondly as the Anime that got me into Anime, I won’t pretend my excitement didn’t decline as the wait grew longer. Eight episodes into season 2 however, and I can see that it was worth the wait.

First off, I have read ahead in the manga so I know what is going to happen later in the story. After the Female Titan arc from the end of season one, I read the Clash of the Titans arc which is the basis of season two, and the uprising arc that follows it. Undoubtedly season two’s 12 episodes will focus exclusively on the Clash of the Titans arc, and end on a cliffhanger for the Uprising arc, expected to be another twelve episodes in season 3.

I don’t like the Attack on Titan manga. I get that it is the exact story as the Anime, but the way the show and the manga execute the story are very different. I dislike the style and character designs. I find the art rather dull and the expressions of the characters limited. Written as a detailed novel, Attack on Titan could be a literary masterpiece, but presented in a graphic format such as the manga just doesn’t do it any favors. This realization had me worried that I was growing to hate Attack on Titan and that season two might disappoint me… thank god I was wrong. the Anime is once again proving itself to be awesome. 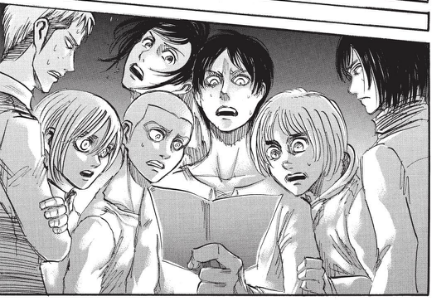 What made Attack on Titan so appealing to so many people was its visuals and its animation. Contrary to a lot of divisive, popular anime, Attack on Titan has an incredibly unique visual presence aided by a mixture of beautiful painted backdrops and stylized character designs outlined in thick black lines. Studio WIT managed to bring the manga to life while also improving the issues of the art style. Plus, I can’t be the only one who gets really excited whenever the Survey Corps goes ballistic on a group of titans with their Maneuver Gear. I mean, Studio WIT is an offshoot of Production IG, the same badasses who gave us the wonderful fighting in seasons one and two of Sengoku Basara.

Now I’ll be honest, the first season of Attack on Titan was held back by occasional animation errors and inconsistencies, but season two has so far proven that not only can the visuals match the quality of the first season, but they can surpass them. I’m even willing to look past the occasional Computer Generated horses or even how the Colossal Titan is CG now as well.

This post may just end up being a rant about how awesome Studio WIT is but I suppose my point really is that despite all the hate Attack on Titan gets from hardcore anime fans, the long four years wait for a season two, and the suspected dropoff in anticipation among the fanbase, Attack on Titan is still awesome, even though  I was worried I had grown out of it. I can’t help but think that Studio WIT is to thank for this. The talented animators and directors have truly breathed new life into a fan base that was close to death.

I would really like to cover Studio WIT more in depth in the future, looking at not only Attack on Titan, but also their major project from 2016, Kabaneri of the Iron Fortress.

So tell me what you think of Attack on Titan in either Manga or Anime form and as always, see you next time.

3 thoughts on “A Matter of Presentation; How I’ve Come to Love Attack on Titan Again”