With Attack on Titan’s second season now completed, it is the perfect time to look back on the first season and give it a formal review before giving its sequel the same treatment later this week. Attack on Titan holds a special place in my heart as it was the Anime that made me fall in love with Anime back in January of 2014, thus kickstarting a three and a half year obsession that has introduced me to entirely new facets of entertainment I never knew I wanted. I’m surprised I haven’t given this show a formal review before, so without further ado, here is my review of Attack on Titan.

Even if you haven’t seen the show, you probably get the gist of it. Years ago, giant man-eating monsters called Titans appeared and forced humanity to seek shelter behind three concentric walls, Wall Maria, Wall Rose and the innermost Wall Sina. In a town bordering Wall Maria lives Eren Yaeger, a young and passionate boy who wants to explore the world outside the walls. To do this, he seeks to join the Survey Corps, the military branch assigned to go outside the walls to gain intel and kill Titans, all while trying to expand territory.

One day, two unusual Titans known as the Colossal and Armored Titan, break through Wall Maria, resulting in countless deaths, including the death of Eren’s mom. As a result, humanity is forced behind the remaining two walls. Eren is filled with a burning rage and a few years later enlists in the military with his friends Mikasa and Armin. Eren’s goal is to join the Survey Corps, go to the outside world and get revenge against the Titans.

The first episode is one of the best premieres for a show you can find. We get a cool introduction to the Titans and those who fight them, but the show addresses early on that even those specifically trained to fight these beasts struggle to survive against them. It paints the battle between human and Titan as a very one-sided struggle, which sets the narrative stakes pretty high for the rest of the show.

When the wall does come tumbling down, we are treated to some frightening carnage and the supremely dramatic death of Eren’s mother, accompanied by a narration chronicling this as the beginning of a tale of bloodshed to be remembered for ages. It is an incredible way to start a series.

On the other hand, the few episodes following it aren’t quite as exciting. Episode two focuses on the fallout from the premiere and episodes three and four covers the characters’ training in the years following the attack.

There is some so-so comic relief, some character development that doesn’t add much and occasionally awkward dialog. Additionally, the show’s major animation flaws are most evident in these early episodes (although those were corrected with the Blu-ray releases). Episode five is where Attack on Titan truly hits its stride.

Attack on Titan plays around with your expectations a lot. For instance, the type of show you expect Attack on Titan to be after the three episodes is much different from what you will expect of it after five episodes. In the first half, this is a very good thing, as the show gets to surprise you with new revelations about the Titans or major character deaths, but the second half of the show can be a bit dodgy.

In the second half, the plot gets a bit confusing and you may spend long periods of time unsure about what exactly is going on or what a certain character’s plan is. This in some part is by design since the protagonists are also trying to figure things out, but the execution can lead to some confusion if you are not attentive. One thing is for sure though and it is that Attack on Titan is designed from the ground up to grab you with as much flare as possible.

Attack on Titan’s bombastic action and dark tones are the makings of a Hollywood blockbuster and this is in no small part due to the show’s director, Tetsuro Araki. Araki is the director of Death Note, High School of the Dead, Guilty Crown and the more recently, Kabaneri of the Iron Fortress. It is no surprise that this show became such a huge success when you look at the popularity of his other shows, especially Death Note.

Araki has a talent for pinpointing the most crucial themes and tones from the source material of his shows and then escalating them to an even more extreme degree. He can make scenes of characters giving speeches just as epic as scenes of armed soldiers descending upon an army of man-eating beasts and that talent is what makes Attack on Titan such a joy to watch, even during the breaks between the action.

For more on his style, I refer you to YouTuber Digibro, who goes into greater detail about Araki’s style.

It would be criminal to go any further without addressing the soundtrack. Hiroyuki Sawano is one of my favorite composers for Anime. His blend of electronic beat with orchestral ensembles has resulted in some truly breathtaking tracks over the years. Attack on Titan is a show that thrives on action and Sawano’s soundtrack makes it that much better. Give her a listen, I’ll wait…

Maybe this is just me coming off of the high from the recent second season, but it is often underappreciated just how good Attack on Titan looks and how distinct its visual style is from other even equally popular shows.

Environments and backgrounds are gorgeous in this show. It’s almost as if the characters were animated completely separately from the backgrounds. Each character is outlined in thick black lines that contrast the gorgeous painted scenery. Studio WIT has a good habit of keeping the animation hand-drawn where it is most important, only implementing CG for pedestrians to conserve the budget. The film Empire of Corpses, which WIT also produced, is a good example of this. However, Attack on Titan’s first season went above and beyond by not having any noticeable CG that I can recall.

That in itself is impressive when you look at the action in Attack on Titan. The Titans can only be killed by severing the nape of their neck- a weak spot that prevents their bodies from regenerating. The fighters make this incision by using 3D maneuver gear, a blend of gas powered propulsion, grappling hooks, and sharp, interchangeable blades.

It’s a clever concept that makes fights that much cooler. In fact, a lot of the technology and strategies employed by the characters are well thought out, such as a scouting formation detailed in the second half of the show, where a scouting party is spread out wide along the land shooting up flares to signal when Titans appear, prompting the entire formation to change direction. All in all, the military strategies employed by the heroes are well thought out, even if things go awry and they go awry quite often.

Back when I was talking about the narrative I stressed how the narrative stakes were very high. It’s easy for mindless enemies like Titans or Zombies- who begin as frightening- to become bland or in bad cases, silly. Attack on Titan is guilty of making the Titans appear more silly as you become desensitized to them. However, because they are so efficient at killing humans and because the show stresses the death toll, the Titans continue to be an imposing foe even into the second season and that’s what matters.

Finally, we must address the characters. The quality of the characters varies. Some are excellent and many are fun, but disappointingly, Eren is not the best protagonist.

My view of Eren as a character may be swayed by my having read ahead in the manga but Eren really isn’t that compelling of a character. He is a spitfire, I’ll give him that, but despite all that passion he never really amazes as a character. Similar to the web series RWBY, he does not develop a lot and just kinda stays the same while the other characters get all the spotlight.

This view of Eren may also be due to the fact that the English dub of Attack on Titan kind of ruined Eren for me, so if you want to like Eren more as a character…

DO NOT WATCH THE ENGLISH DUB

The rest of the supporting cast is mostly solid. Armin’s development from coward to strategist is still awesome (he is my favorite character), Mikasa’s fierce loyalty to Eren and physical ability make for some of the best scenes in the show, and I could go on for hours about the members of the survey corps, especially Levi, Hange and Erwin. Some of Eren’s fellow trainees are underdeveloped so you get the sense they are only there because they are going to become more important later.

If you still haven’t watched Attack on Titan after all these years, this might be the perfect time to start watching. At the time of writing, Attack on Titan’s long-awaited second season has finished airing three days ago and a third season is already confirmed for 2018.

Those looking for some cool action, fun characters, epic drama, or those who simply have a boner for eye candy will find plenty to love about Attack on Titan. Despite a lack of development expected from a show with so many characters and occasionally bad writing, Attack on Titan is a solid show that everyone should try. 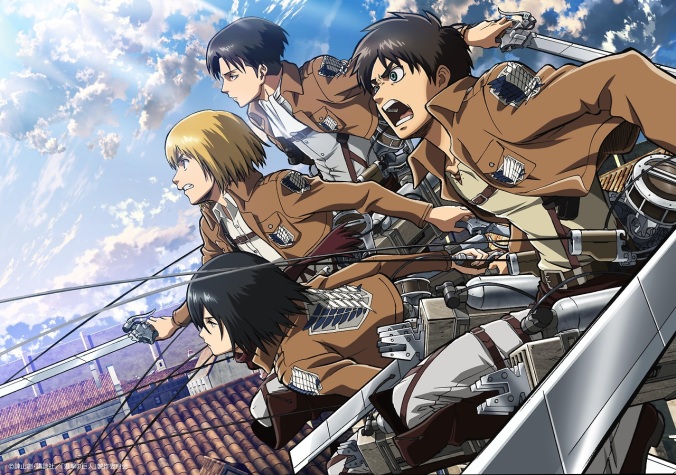 This review took longer than most. Turns out I have a lot to say about this show and I think I’d like to make more posts about this show and analyze why it is such a success. Love it or hate it, shows like this are what convert people into anime fans and I will always appreciate it for that. Anyway, thanks for reading and I’ll see you next time.

Baking With An Amateur
366 posts. One year and done.
Takuto's Anime Cafe