The spring Anime season is upon us and everyone is either watching Violet Evergarden now that it is on Netflix or the new season of My Hero Academia. Meanwhile, I’m over here still watching Darling in the Franxx, the collaboration between Trigger and A-1 that I covered a couple months ago. So before everyone forgets about it, I thought I would cover the show thus far and see how it has been shaping up as it enters the second half of its 24-episode run.

As far as the story goes, Darling is at its best when it is focused on the pubescent struggles of its protagonists, the society that has deprived them, and the children’s place within it. The character arcs have been pretty strong and not just for Hiro and Zero Two, whose relationship is still by far the most interesting. The other characters have only gotten more likable as well, which is especially good news for characters like Zorome who was just kinda a dick at the beginning.

The first six episodes are mostly centered around Hiro’s efforts to pilot with Zero Two again so he can become a member of the Parasites. After that has finished, Both of them are officially part of Plantation 13’s parasite unit and the story shifts its focus to character studies and world-building. The world building was by far what I was most hoping to see done effectively by the show and it has not disappointed thus far.

The main characters are woefully ignorant of the concept of sex and love, not even knowing what a kiss is. During episode seven, they discover an overgrown and abandoned, yet modern looking Japanese town and Kokoro discovers a book about childbirth, something that the kids undoubtedly know nothing about. More frightening is that for how deprived the protagonists are, they might also be more privileged than other kids in their same position.

Apart from having names, the kids from Plantation 13 also seem to have a lot more freedom than others, as evidenced by the appearance of other Parasite units. There is a clear experiment being performed not only on Hiro and Zero Two but the other kids as well. They have significance within the world.

Perhaps my favorite instance of worldbuilding comes from episode 10 when Zorome, separated from the group, meets an adult and we get a glimpse, however brief, into the life of a citizen in the plantation. The exchange between Zorome and the old woman is sweet but also carries frightening implications. There is often a sense of unease permeating the story.

The story is not all frightening, though. With the kids’ dealings with puberty come some frivolity that is cute, if a bit tried and tested for the genre. Episode eight does it well, with a “boys versus girls” framing device for the plot, but the fact that episode seven is a beach episode at all had my eyes rolling. Then again, beach episodes are an anomaly that you get used to after a while because as tired a trope as it is, it still can be entertaining.

I have been making comparisons between the first twelve episodes of Darling and the first half of Neon Genesis Evangelion. My comparison is rooted in Evangelion’s existentialism, which the series has become known for, not being as present in the first half of the series. Rather, the first half of Eva focused on being a fun mecha series, with hints of some spooky shit in the background. In the same way, Darling seems to be building up to some major reveals that, if done well, could make a phenomenal conclusion.

There are also just basic visual similarities between Darling and Eva that feel like direct inspirations. Apart from any number of design inspirations that indirectly have spawned from Eva’s influence, the architecture and cinematography seem reminiscent of Eva at times. Additionally, I have come to think of Eva whenever I see long sequences of dialogue in elevators or escalators, which Darling has quite a few times. A small detail I know, but one any viewer of Eva should understand.

Granted, I would be hard-pressed to call Darling even half as technically impressive as Evangelion. Even for a show animated by Trigger, I have been rather disappointed by the action in this show. The mech designs have not grown on me the way I thought they would have. Strelitzia looks cool, but some of the other mechas do not have the same appealing look to them. 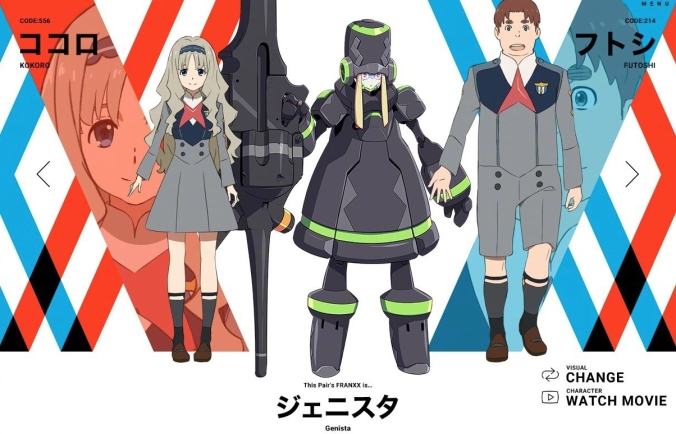 Just… so dull. The kids piloting it are precious though

This is mostly the fault of the artwork and animation during major battles. Even when the animation kicks it up a notch, the visuals seem unpolished the animation simply can’t bring the dull artwork to life as well. Even worse are the designs for the monsters which are either overly complex to the point of being visually cluttered, or so lazily designed that they are plain ugly.

There are moments which were able to elicit excitement from me in the action department, but even then there was a feeling that what I was seeing was lacking and that is sad for a show produced partly by Trigger. Thankfully, the artwork and character animation off the battlefield is really easy on the eyes, once again thanks to Masayoshi Tanaka. If action is what you are looking for from this show, at this point I can’t say it is all that impressive.

I expressed optimism at Asami Tachibana’s score for Darling, but I think there has only been a handful of tracks in the soundtrack that have really grabbed me. The main theme of this clip below is the best one by far. I know I described her works as a mixture of Hiroyuki Sawano and Taku Iwasaki, but now I feel it is not as epic as the former nor as versatile and intoxicating as the latter.

Finally, I want to address the sexual themes, because it seems we have not gotten any more development of said themes. I have no doubt it will tie into revelations later in the plot, but one should note that the fanservice, in general, has not been nearly as prevalent. Well, with a beach episode in episode seven and the plot of episode eight, it is certainly there, but the fan service that exists past episode two is not nearly as intense. In fact, it feels a lot more diegetic. I would not be surprised if the initial reveal of the mech’s mechanics was only for shock factor.

Darling in the Franxx is a mediocre action show, but I would argue it is a compelling character study and possibly a great drama. However, if you have not started watching it now, then I would recommend waiting until the show is finished before giving it a chance. For all the fun I’ve had with it, I can’t say that the destination will be worth the journey. Wait for the final reviews of the show when it ends this summer and make your decision then.

If you have been watching Darling along with me, leave a comment below and tell me what you think of it so far and if you think it is worth the watch. If you’d like to hear my thoughts on any other shows, let me know as well. Thanks for reading and as always, I’ll see ya next time!

One thought on “Mid-Season Checkup – DARLING in the FRANXX”